Tuesday, February 21, 2006
Did the Izzone spell out "GO BLUE" last Saturday?
By now you may have read accounts of how Michigan students posing as Big Ten representatives allegedly hoodwinked the Izzone student cheering section at Michigan State into displaying the message "GO BLUE" before Saturday's Michigan-Michigan State game in East Lansing. Earlier today I received the same email that the above-linked bloggers appear to have received. (To paraphrase a line from Singin' in the Rain, one of the plotters appears to have given an "exclusive" to every blogger in town.) So maybe I should have posted right away--not doing so cost me the proverbial scoop.

Instead, I asked more questions and at least obtained some further details that maybe you haven't read yet....

The altercation between a Michigan State student and Michigan reserve Amadou Ba may not have been the only excitement before tip-off at last Saturday's game between the Spartans and the Wolverines in East Lansing. 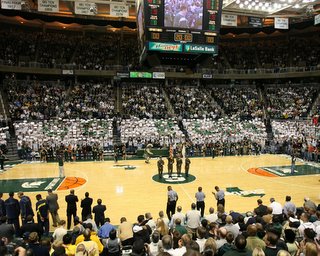 According to a source who wishes to remain anonymous, students from the University of Michigan posed as interns from the Big Ten Conference and were able to distribute over 600 cards to the Izzone student cheering section at the Breslin Center prior to the game. The source says students in the Izzone were told that holding the cards up during the National Anthem would spell "GO STATE." In actuality, the cards were, according to this source, printed to spell "GO BLUE."

It's an intriguing story--and one that raises some questions. For one thing, why was the "GO BLUE" (see picture) so hard to read? And how could Michigan students get an entire section of rabid Spartan fans to do such a thing (even if it was, in the end, done rather illegibly)?

In search of answers, your intrepid blogger interviewed the source for this story, a Michigan student who claims to have been in on the plot's planning and execution.

"No one stopped us"
Q. How long have you been working on this?

A. This was the culmination of a couple years of kicking around the idea--and a couple months of serious research and work.

Q. I'm curious: how exactly does one "pose" as a Big Ten Conference intern?

A. Basically our plan was to be as professional as possible and not arouse suspicion. We were able to acquire a few official Big Ten sweater vests, without which the plan probably wouldn't have been possible.

A. Actually, we'd put together far more "backstory" than we needed. We were Big Ten interns, working under so-and-so, the Big Ten had a big plan to do promotions at every member school, we had worked with so-and-so in the MSU Athletic Department. We figured that much could get an inquisitive usher or student off our back--but probably wouldn't hold up if a Big Ten or MSU official really looked into it. As it turned out, none of this was necessary.

A. We entered through the access tunnel on the south end of the arena. We passed the TV truck and entered a door on the left. Went through one more room, passed another door, and we were into the lower concourse below the seats.

Q. Wasn't there any security personnel?

A. Yes, there were two guys in Breslin Center jackets at a desk, but no one stopped us.

Q. So this was well before game time?

A. It was around 1:15, over an hour before gates opened to the general public. A friend and I had done a "test run" at a women's game about a week earlier, so I knew exactly where to go once we were inside the tunnel and then the arena. Between our vests, professional-looking cards, and just a general look that we knew what we were doing and were supposed to be there, no one gave us a second look.

A. The Izzone had a couple dozen students hanging around the bleachers when we arrived. My friends immediately started placing the cards on the seats while I went to talk to some of the Izzone leaders, briefly explaining what was supposed to happen. They were all really excited about the idea, offering to help us pass out the cards. One student suggested we should "go down and do this at Michigan, only have the cards say 'we suck' or something like that." It was quite a test to bite my lip and not burst out laughing when I heard that. It took probably 20 minutes to distribute all the cards.

Q. Did you make the cards yourselves? 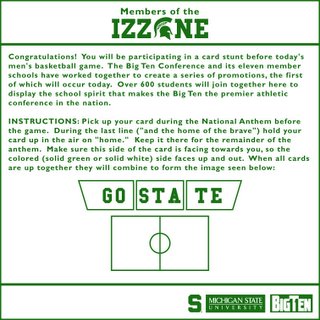 A. Yeah. I spent most of Friday night arranging the white and green cards in order so that we could lay them down on the bleachers quickly.

Q. After you were done distributing the cards, what'd you do?

A. I finished up talking to the Izzone members and then we left.

Q. Wait a minute. What about the whole Amadou Ba incident? Did you see that happen?

A. I didn't know about that until later. It must have happened after we'd placed the cards and left. We were there well before the arena was open to the general public.

Q. Was either team on the floor for their shootaround while you were there?

A. Neither team was out there but a couple of the Michigan team managers were out on the court.

A. We were at the game. After we passed out the cards we went to change at a friend's house. Then we went back to Breslin as ticket-holders around 3:15. Those 45 minutes we spent sitting in our seats waiting for the National Anthem were ridiculously tense.

Q. The cards were in the seats that whole time?

A. That was our major concern, that once we had placed the cards and left the arena an Izzone member would talk to an MSU official about how cool the card stunt was and it would all come crashing down with a phone call or two. In retrospect I'm pretty surprised that this didn't happen.

Q. OK, the National Anthem plays and the Izzone holds up the cards. Why was the "GO BLUE" so hard to read?

A. I was a little disappointed with the actual outcome. We didn't have them hold the cards up long enough, which made it tough for people in the arena to figure out what they said before the students took them down again. Plus, you can tell in the pictures that a few people in the "U" moved around. And they completely mangled our "E."

Another factor was cost. It would have been nice if the cards had been bigger than 10 x 14 but this was very expensive for us as it was. We'd been calling people and telling them to make sure they watched the beginning of the game in case it was mentioned. Unfortunately, the previous game went long and, of course, the Amadou Ba incident overshadowed the card stunt anyway.