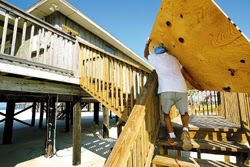 At 11:45pm last night an average Big Ten game containing less than 61 possessions was spotted seven miles east-southeast of State College, Pennsylvania, proceeding in a westerly direction toward State College, Columbus, and points west. The game has been classified as a Category 4 Dull Game, meaning the potential exists for severe and debilitating boredom, with substantial loss of enthusiasm.
Fans are advised to bring alternative means of entertainment to a Category 4 game, up to and including iPods, cell phones, electronic games, a deck of cards, yarn, kazoos, a blank piece of paper to stare at, zip code directories, floss, or Al Gore.

Still, if the reaction here in this otherwise Colts-crazed city is any indication, fans are prepared to ride out the worst. Evacuation advisories have gone largely unheeded and the locals who gather every morning to talk hoops at Café Patachou at 49th and Pennsylvania say they've seen worse. "Back in '05, I saw a Northwestern-Indiana game that I swear was tied at seven at halftime," says Charlie Stratton, a local county official and rabid hoops fan. "This won't be so bad."

The numbers, however, tell a different tale. The Category 4 game represents the most intense and severe case of dullness measured in an average Big Ten game since at least 2004-05, when records on pace became available. The average Big Ten conference game in both 2005 and 2006 contained about 64 possessions.

Fans in the path of a Category 4 Dull Game are advised to seek shelter immediately in an interior closet or crawl space. Doing so will be more entertaining than watching the shot clock hit single-digits on every single trip down the floor. 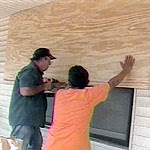 At least one hoops blogger has responded to what he sees as a need for peace of mind among fans. John Gasaway has announced he's offering "boredom insurance" at what he calls "competitive rates" on many Big Ten games.
The rates paid by policy holders are determined by the likelihood of excessive dullness in a given contest--the higher the likelihood, the higher the rate. Rates this season, Gasaway says, are running higher than at any time since the change from a 40-second shot clock to 35 seconds in 1993. In fact, Gasaway notes that Northwestern games this season aren't covered at all by any reputable underwriter. "Look, they're averaging 55 possessions a game. No one's going to carry that risk," Gasaway says.
Insured or not, hoops fans here in the Circle City say they're ready for the worst. "I'm going to a couple games this week," Stratton says. "And if they try to evacuate me 'for my own safety,' I ain't going. These are our teams."

In today's less Wonk-ish venues....
Michigan State plays Illinois tonight in Champaign (ESPN, 9ET). Detroit Free Press columnist Michael Rosenberg says Tom Izzo "would rather dye his hair maize and blue than coach a one-man show, but he has no choice: This is a transition year for the Spartans, and [Drew] Neitzel is the one who has saved it." Ay, carumba. Where to start....
Neitzel's having a great year (he's an All-Wonk honoree) and had an even greater game against Ohio State Saturday night. He's that rare player who can kill you on any given possession with either the right pass or a three, depending on what you give him. The Spartans wouldn't be as good as they are without Neitzel.
But to term this year's team "a one-man show" is to miss still another great story that's happened in East Lansing so far this season: the defense and rebounding are back. Granted, the meat of their schedule is still to come, but to this point Michigan State's defense in conference play is significantly better than it was last year. And the Spartans rank first in the conference on both the offensive and defensive glass in Big Ten play. So when Neitzel has an off game, the Spartans can--and will--still compete, rest assured. If this is a "transition year" it's a transition back to the Izzo brand of hoops. Good transition, that.
Multi-man show Michigan State Spartans, Wonk salutes you!
Programming note
The Wonk Wife and I are about to embark on our annual start-o'-February flee-the-slush trip to California. If you're strolling around Santa Barbara this weekend and want to talk Big Ten hoops, flag me down. Otherwise, c'est-la vie: no posting here Friday through Wednesday, Feb. 2-7.

BONUS all-top-40 edition of Wonk back!
Don't just mutter ineffectually; email me!
Badger fans and devotees of yeasty 70s pop have already heard this....
Wonk,
Great blog once again this year. I just wanted to pass along to you the version of ABBA's "Fernando"--Wisconsin style: "Alando." Check it out. I think Bucky Fandom has reached a whole new level this year!
It's a good day to be a Badger!
Heather A.
Thanks, Heather. (The writes-itself Bo Ryan-ized version of "Bo Diddley" surely can't be far behind.)
¶ 6:14 AM