Thursday, February 22, 2007
Is the Kansas defense that good or is the Big XII that bad?
At the beginning of the year I nominated Kansas as having had the best defense in the country last year, never mind their first-round loss to Bradley in the tournament.

This year the Jayhawks are at it again: piling up gaudy numbers in Big XII conference play....

(Conference games only, through Feb. 21) 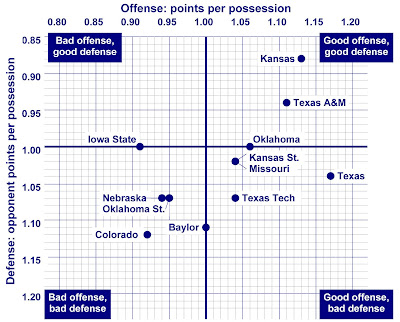 Of course, glittering Kansas stats tend to trigger skepticism out here in non-Big XII country, for the usual "yes but you play Baylor" reasons.

Well, as it happens the Big XII does indeed have some wonderfully inept offenses this season. Iowa State, Colorado, Nebraska, and Oklahoma State are all scoring at a rate of 0.95 points per possession or worse in conference play. (Translation: about as bad as Illinois this year. And, no, these teams' numbers on offense aren't woeful merely because they have to play big bad Kansas. Trust me: none of these four turn into Wake Forest '05 when they play Missouri.) No fewer than six of KU's 13 conference games have been played against members of this feckless foursome. So, yes, we do need to dial back the hype on the Kansas D a little....

Emphasis on "a little." Fact is, this is an excellent D that happens to have faced a lot of weak offenses. Kansas doesn't have to answer for its opponents. No, the really interesting thing here is that the Kansas D is achieving almost the exact same level of excellence as last year's defense but through different means.

Last year KU forced an absurd number of turnovers from their opponents and made life miserable for any opposing player with the effrontery to attempt a two-point shot. This year the Jayhawks are getting fewer turnovers but are stronger on the defensive glass and much stronger in their 3FG defense.

Oh, and this is off-topic but the offense in Lawrence this year (1.13 points per possession) is significantly better than last year's (1.07).

A defense less reliant on opponents' turnovers should--should--be a defense poised to carry its team further in the postseason.

Of course, now that I've said that Kansas will probably lose by 20 in the first round to the winner of the play-in game.

In today's less Wonk-ish venues....
The Chief danced his final dance, t-shirts were switched from orange to black, and then there was the second half of a basketball game....

Illinois beat Michigan 54-42 in Champaign last night. No, not a slow pace. Just inept offenses (or spectacular D's). With just 42 points and no less than 20 turnovers in 63 possessions, this was the Wolverines' worst performance on offense this year. Warren Carter posted a near dub-dub with an 18-9 in 30 minutes for the Illini. The end game for both teams is now a little clearer. Illinois (20-9, 8-6) finishes with road games at Penn State (Saturday) and Iowa (next Saturday). Lose both and they're out. Win both and they're in. Win one and fret. Michigan (18-10, 6-7) plays at Minnesota Saturday, then hosts Michigan State and Ohio State in Ann Arbor to end the year. The Wolverines need all three games and even then they can't be sure. (Box score.)

Ohio State beat Penn State 68-60 in Columbus last night. What is this strange power the Nittany Lions hold over the otherwise formidable Buckeyes? It's like South Carolina with Florida last year. Weird. PSU guard Ben Luber limped off the floor in the game's opening minute and did not return. Nevertheless Penn State led by three at the half as Ohio State clanged threes (5-of-18 for the game) over the Nits' zone. Meanwhile there was a player down in the paint by the name of Greg Oden who appeared to be faring better: a 17-14 dub-dub on 6-of-9 shooting. So now the get-Oden-the-ball grousing is getting pretty loud in Columbus. (Best line: the Buckeyes look like "they gave up Oden for Lent.") (Box score.)

Indiana beat Minnesota 71-59 last night in Bloomington. The Gophers were in this one late but scored only nine points in the game's final eight minutes. D.J. White scored 17 points and Roderick Wilmont hit 3-of-5 threes and added 16. (Box score.)

Iowa beat Purdue 78-59 last night in Iowa City. Matt Painter had harsh words for his defense after the game but it was the Boiler offense that was really sub-par last night: 19 turnovers, anemic offensive rebounding, and average shooting. Tyler Smith scored 18 points on nine shots for the Hawkeyes. Iowa (16-12, 8-6) travels to Penn State next Wednesday before finishing at home against Illinois. If they win both, it will be interesting to see what happens. As for Purdue, their game this Saturday at Northwestern is huge. If they lose, they're likely done. (Box score.)

In defense of Weber
Reading the article you linked by Greg Couch in the Chicago Sun-Times reminded me of something I heard once about how scary it must be to have your career in the hands of 19-year olds.

Perhaps that fear is only exceeded by having you career commented upon those who think a coach should be in absolute control of those 19-year olds in ways that their parents never were while they were still only 17 year old. I find it rather distasteful that some people are using this incident to try and provide a turbo boost to their fire Bruce Weber bandwagon.

Just how far have we gone into the bearded Spock universe to infantilize these young men by trying to blame Jamar Smith’s actions on his…, wait for it…, basketball coach?