Monday, February 19, 2007
Looking at the back of Kyle Whelliston's head
I did that a lot this weekend.

Kyle is the founder of The Mid-Majority, an OK site, I guess, if you like superb writing on college basketball, comprehensive user-friendly tempo-free stats, sharp wit, unparalleled web design, etc. (Yawn.) These days Kyle covers mid-major hoops for ESPN, of course, and he was in Indianapolis this weekend to cover the Southern Illinois-Butler game. 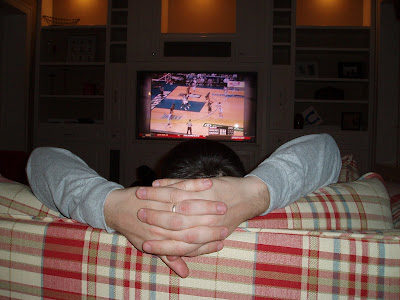 Being with Kyle Whelliston during BracketBuster weekend is, well, memorable. Let's just say this is a big weekend for him. (True story: he gets into town Friday night and we're slipping and sliding single-file along a too-narrow snow-covered sidewalk in Broad Ripple looking for a place to eat. I'm focused intently and exclusively on not falling into the street when I hear Kyle, behind me, say: "Winthrop's up four." He has stolen a furtive glance at the TV in the tavern we're passing.) So while I tried to keep up my end of the conversation ("So, Kyle, what do you enjoy most about my incredible blog?"), I had to content myself with seeing a lot of the back of his head, as he tracked the weekend's events with the minute precision of a seismic monitor. (Pictured: watching Drexel vs. Creighton. After that, at midnight local time, there was the tip for Ohio vs. New Mexico State. Kyle watched. I called it a day.)

The weekend did, however, provide a worthy real-life parallel to the Marshall McLuhan cameo in Annie Hall. Having settled on a sports bar for dinner, Kyle has requested of the staff that the NBA all-star weekend "celebrity" game (quotation marks used rightly—was that Bow Wow?) be replaced on the big screen with Winthrop-Missouri State. Whereupon the gentleman next to us at the bar in the St. Louis Cardinals hat starts holding forth loudly and with full-on presumptive bar-guy omniscience on the Winthrop Eagles. He's going to tutor Kyle Whelliston on the finer points of this mid-major.

And I say to myself: this is going to be great!...

BAR GUY (hitches up his belt): Yep, Winthrop's pretty good. They're out of the Southern Conference.

BAR GUY: Um, yeah. You know, they only lost to Wisconsin by five.

KYLE: By three. In overtime. In Madison.

BAR GUY: Of course, they've dropped some other games....

KYLE: Three. North Carolina, at Maryland, and at Texas A&M.

Indefatigable hoops traveler Kyle Whelliston, Wonk salutes you! We who love hoops are the richer for your miles.

Editor's note: The original post had North Carolina defeating Winthrop in Chapel Hill--actually the game was played in Charlotte. That error was mine, not Kyle's.

In today's less Wonk-ish venues....
Much news emanating from Illinois on Friday after this blog hit the streets....

Lose a player, lose a symbol
Bruce Weber announced Friday morning that Jamar Smith will not return to the team this season. Smith was the driver in last Monday night's one-car accident that resulted in the hospitalization of his passenger and teammate Brian Carlwell. (Carlwell has since been released and may be able to return to action this season.)

Ordinarily this would have been big news. Not on this Friday....

Because about an hour or so prior to that, the University of Illinois announced that Chief Illiniwek's appearance at halftime of this Wednesday night's game against Michigan will be the last performance in the Chief's 81-year history. The NCAA, in turn, announced that it will lift its ban on Illinois hosting postseason events on its campus, a ruling that, for example, will now make it possible for the Illini to host an NIT game, should that become necessary.

So the Chief is through. Allow me to address the following to fellow U of I alums and current students—everyone else stay out of this for a second:

I'm baffled at the fuss being made over this by people who didn't go to Illinois. Truly. And I'm baffled by some of the reactions I'm seeing regardless of one's alma mater. (Witness this odd piece by the usually sure-footed Mark Tupper, in which magnanimity is nominally prescribed but in the most querulous voice imaginable. This kind of total tonal subversion of the right words with combative bathos is truly Nixonian.)

That being said, this day has been coming and indeed foreseeable for a long time. I don't begrudge those who cherish their memories of the Chief—and those who do miss the mark badly.

But if Lester Leutwiler appeared afresh and without preamble this afternoon and introduced this notion for the very first time, we would not, in 2007, choose this particular alternative. And now that it's time to recognize that and jettison a longtime tradition, maybe it's time as well to recall that this particular tradition was not part of what one might term the original orange and blue equipment.

And so, too, is the University of Illinois itself. It is older, larger, and better.

Illinois beat Northwestern 48-37 in Champaign. I know what you're going to ask. Yes, it was slow but not that slow. At 54 possessions this was speedier than the game played by these same two teams in Evanston just nine days ago. But the Wildcats scored a near-season-low 0.69 points per possession. No player reached double-figures for NU. Rich McBride made 5-of-10 threes and led the Illini with 15 points. (Box score.)

The weekend in hoops--Saturday!
Wisconsin beat Penn State 75-49 in Madison. Alando Tucker led the Badgers with 22 points on 15 shots. Kammron Taylor made 4-of-6 threes and added 18 points. Since losing at Indiana on the last day of January, February-version Wisconsin has made 45.6 percent of their threes and, indeed, has been more consistent in their shooting from beyond the arc than they've been in their two-point shooting. I said this in November: if this team can make threes, ye gods....(Box score (pdf).)

Michigan beat Indiana 58-55 in Ann Arbor. From this vantage point Kelvin Sampson has it about right: the Hoosiers played their normal game but their shots didn't fall. Armon Bassett and A.J. Ratliff combined for 3-for-15 shooting on their threes. Earl Calloway, still smarting from a shoulder injury suffered in Thursday night's game at Purdue, did not play. For the Wolverines, Dion Harris made 4-of-8 threes and scored 16 points. (Box score.)

Michigan State beat Iowa 81-49 in East Lansing. This was actually a fairly slow game (59 possessions) but pretty much any time the Spartans didn't turn the ball over they scored. Drew Neitzel and Raymar Morgan combined for 33 points on 21 shots. Adam Haluska scored 11 points on 14 shots for the Hawkeyes. (Box score.)

Other hoops you should know about--and do
Vanderbilt beat Florida 83-70 in Nashville on Saturday. Yay, me. Just four days after I emitted my best assistant-principal tut-tut with regard to the Gators' defense (doubting the permanence of their "unsustainable" 3FG defense), Billy Donovan's team lost their first SEC game by giving up 1.17 points per possession and by allowing an opponent to hit 10-of-21 threes.

Other hoops you should know about--but may not
Last night Arizona State beat USC 68-58 in Tempe, giving first-year coach Herb Sendek and the Sun Devils their first Pac-10 win. A very, very bad loss for the Trojans, who, along with Stanford, have been getting far too little ink while Arizona gets far too much. (Ink distribution for UCLA and Washington State? Just right. Clearly the cream of the Pac-10. More later.)

Today's email is from March 6, 1860
Regular readers may recall I devote the bottom of each Presidents Day post to the words of our 16th and greatest president. This year's installment is lifted from a speech delivered at New Haven, Connecticut, in the run-up to the presidential election of 1860. The future president had just given his more famous speech at the Cooper Institute in New York. What is less well remembered, however, is that as long as he was out east, he graced additional rostrums and spoke on what was to be done with regard to the institution of slavery in existing and future U.S. territories. Graced them very ably (and presaged a famous passage some 70 years later from Winston Churchill)....

If I saw a venomous snake crawling in the road, any man would say I might seize the nearest stick and kill it; but if I found that snake in bed with my children, that would be another question. [Laughter.] I might hurt the children more than the snake and it might bite them. [Applause.] Much more, if I found it in bed with my neighbor's children and I had bound myself by a solemn compact not to meddle with his children under any circumstances, it would become me to let that particular mode of getting rid of the gentleman alone. [Great laughter.] But if there was a bed newly made up, to which the children were to be taken, and it was proposed to take a batch of young snakes and put them there with them, I take it no man would say there was any question how I ought to decide. [Prolonged applause and cheers.]   ¶ 6:53 AM