Thursday, February 08, 2007
North Carolina defense: better than the cliché says
Yo-hey, alert readers! I'm back safe and sound from my annual flee-the-slush getaway. (Little did I know the Santa Barbara Film Festival would be winding down and I'd be partying with Heather Graham, Forest Whitaker, and, on an admittedly less glamorous note, Al Gore.) And every year my return from this first-o'-February Babylonian exile triggers the same thought:

Yikes! We're just a few dozen days from Selection Sunday! Time to start talking about the teams we'll be talking about next month, starting with North Carolina's 79-73 win over Duke last night in Durham.

During last night's contest a certain ESPN analyst neatly encapsulated the common folk wisdom where the Tar Heels are concerned. With a couple minutes gone by in the second half, this analyst said in effect: North Carolina is young and absurdly talented. They think they can just outscore people. But they need to learn to play better team defense.

It's an attractive narrative: talented young team learns talent isn't enough and commits to playing tough defense. And, write this in stone, if the Heels avoid a Bradley/Bucknell early-round mishap, this is precisely the story line that will be drummed into your ears ad nauseum in late March.

The Tar Heels' defense is already the ACC's best by a large margin. It's also significantly better than their offense. Truly. (Don't mess with me on this one. I've got tempo-free means and standard deviations for ACC conference play through last night. I'll use 'em, by gar, I will!) And the strength of that D is on the interior: conference opponents are making just 43 percent of their twos against Carolina. Indeed, defending opponents' twos is UNC's most successful endeavor on either side of the ball. They may be young but they're also tall, fast, and numerous.

All well and good--but all of which makes Carolina's loss on Saturday at NC State all the more incomprehensible. It seems to have been a fluke, yes, but nevertheless a fluke that, to quote C.K. Dexter Haven, was helped along greatly by the Heels. Better now than in six weeks.

BONUS nimble skirt around one of the four dullest topics!
Maybe it's just me but it seemed that the misinformation was flying especially fast and furious during last night's telecast. For instance: the notion that the North Carolina "feeds" off of opponent turnovers. Nonsense. Clemson feeds off of opponent turnovers but the Heels' ACC opponents cough up the rock at a level that's only slightly above average.

Pro bono moonlighting for other conferences
The tempo-free aerial as of this morning for the ACC (conference games only) looks like this: 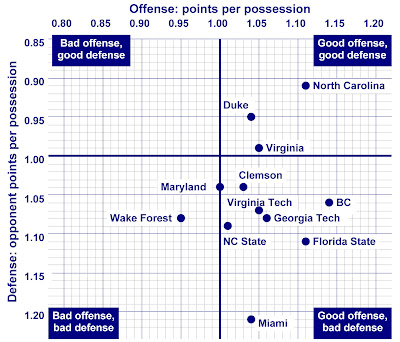 In today's less Wonk-ish venues....
Some hooping to catch up on now that I'm back, starting with last night's strikingly aberrant domination (3-1) by visiting teams. Let it thus be fairly said of February 7: Up was down! Black was white! Good was bad!...

Hoops while I was out--last night!
Wisconsin beat Penn State 71-58 in State College. Geary Claxton posted a 13-10 dub-dub in just 29 foul-blighted minutes but the fact that it took him 13 shots to get there underscored the dynamic at work in Bryce-Jordan: teams don't shoot well against the Badgers but teams shoot very well against the Nittany Lions. Alando Tucker led all scorers with 24 points on 19 shots. After eight games of almost uniformly miserable outside shooting, Wisconsin has made a very respectable 13 of its last 30 threes. Then again the opponents were Penn State and Northwestern. Speaking of the latter....(Box score (pdf).)

Illinois beat Northwestern 58-43 in Evanston. During this game ESPN2 tracked how many seconds remained on the shot clock when the Wildcats attempted a shot. This was both interesting and odd: interesting because it reflected a laudable possession-based impulse. Odd because the inference being drawn was that NU was playing at an unduly fast pace since they were attempting so few shots in the last 10 seconds of the clock. Au contraire! In fact last night's game was one of the slowest of the year in the Big Ten: just 50 possessions. (Pace isn't merely a function of how fast you shoot. It's also a product of fouls and turnovers--or, as seen last night, the lack of both.) Rich McBride made 5-of-11 threes for 15 points and Shaun Pruitt posted a 13-15 dub-dub. And Vince Scott will want to burn this tape, pour the ashes into an urn, weld the urn shut, charter a jet, and drop the urn over the Pacific at its deepest point. (Box score.)

Purdue beat Michigan State 62-38 in West Lafayette. The Spartans scored 12 points in the second half. Twelve. A number so low you can spell it. (A "complete mental and physical meltdown," Tom Izzo termed it afterward.) BONUS very sophisticated analysis! Scoring 38 points in a 63-possession game is really bad! True, Izzo's team couldn't hit a shot to save their lives last night. But shooting comes and goes while the real issue here endures: Turnovers are officially killing Michigan State. No other Big Ten team comes close to giving the ball away as often as do the Spartans. (No, not even Michigan.) MSU coughs the ball up on nearly 27 percent of their possessions. Ye gods....(Box score.)

Iowa beat Minnesota 91-78 in Minneapolis. Good grief: this game featured the highest overall effective FG percentage of any game this year in the Big Ten. Both teams were on fire, the Gophers actually a little more so than the Hawkeyes. But Minnesota got hammered on the boards and the Hawks enjoyed a +9 in FTAs. Ballgame. Speaking of on fire: Adam Haluska went 8-of-8 at the line and led all scorers with 34 points on just 14 shots. Not a bad couple games here for Haluska, who, bank on it, is about to get a ton of national ink. (Box score.)

Hoops while I was out--Tuesday!
Ohio State beat Michigan 76-63 in Columbus. Mike Conley went 9-of-12 from the field and scored 23 points for the Buckeyes, while his teammates hauled in 16 offensive boards out of 33 possible. Greg Oden and Othello Hunter recorded five offensive rebounds apiece. (Box score.)

Hoops while I was out--Saturday!
Iowa beat Indiana 81-75 in Iowa City. The Hoosiers shot better from the floor than did the Hawkeyes but were done in by 37 Iowa free throws and 15 Hawk offensive boards. Adam Haluska went 10-of-11 from the line and scored 33 points. Roderick Wilmont hit 6-of-12 threes and scored 24 for IU. (Box score.)

Ohio State beat Michigan State 63-54 in East Lansing and it shouldn't have been that close: the Buckeyes missed 10 free throws. Greg Oden posted a 16-11 dub-dub for the visitors. Drew Neitzel made 6-of-12 threes and scored 24 for the Spartans, while Goran Suton added a 16-10 dub-dub. (Box score.)