Wednesday, February 14, 2007
About last night: all eyes turn to the Gators
Two of the top six teams in the country lost at home last night. Virginia Tech beat North Carolina 81-80 in Chapel Hill in OT. And Texas Tech beat Texas A&M 77-75 in College Station on a court-length drive and shot by Jarrius Jackson. Neither the Heels nor, especially, the Aggies were exactly prohibitive favorites for the national championship going into the evening, of course, but they did each have the virtue of potential: specifically the potential of emerging from their respective "power"-conferences as the clear regular-season winners. That potential is diminished by losing on one's home floor.

Speaking of being the clear regular-season winner of a "power"-conference, there's another team you may have heard of that's sitting at 10-0 in the SEC. Pretty much every stereotype--with the exception of precocious youth--that you were hearing about ten days ago with regard to North Carolina can be applied to Florida, for here, on paper, is a team with an outstanding offense but room for improvement on defense: 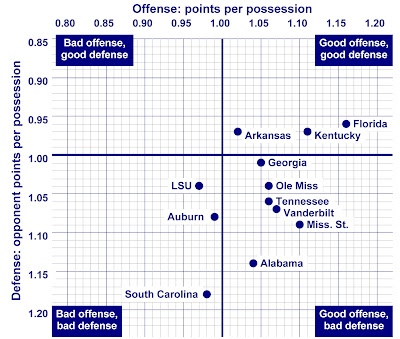 (Conference games only, through February 12.)

Either the SEC is home to some of the nation's best offenses or it has a lot of bad D, you make the call. And actually the numbers here could give a skeptic some reasonably solid ammo with which to declare Florida not as big and bad as they look. In brief: the Gators are thriving on both sides of the ball on threes--their makes and their opponents' misses--and threes are the least stable of pillars. (No, Billy Donovan's team doesn't shoot many threes, nor do their opponents. But the numbers are so extreme as to make up for this scarcity.) Five days ago Ken Pomeroy classified Florida's three-point shooting as so good it's "unsustainable." After Saturday night's win in Lexington, this is actually an even better description of their three-point FG defense, the outlier on an otherwise very ordinary D. The Gators are certainly excellent perimeter defenders but opposing teams will not continue to miss more than 75 percent of their threes against this team, as have SEC opponents to date.

Still, recall that last year the Gators' defense improved dramatically in their six-game run to the national championship. Whether that improvement was due to an epiphany on the road to Indy or merely to uneven tournament competition is in the eye of the beholder. (This beholder says Georgetown and Villanova weren't exactly chopped liver where offense is concerned.) But the larger point is that the 2006 Florida Gators (not to mention the 2006 Indianapolis Colts) made it officially hazardous to make predictions about the post-season based on regular-season D, more specifically the lack thereof.

And then there's the aesthetic point. I watched Florida win at Kentucky on Saturday night and afterward the box score tried to tell me I'd just watched a three-point game. I don't buy it. I never truly felt that the outcome of that game was in any doubt. And that was in Rupp Arena with Al Horford and Joakim Noah sitting a total of 38 minutes. I've never before seen a college team act with quite the same maddeningly indolent-yet-knowing confidence of a defending NBA champion--we'll turn it on when the time comes, thanks--but I feel like maybe I'm seeing one now.

In today's less Wonk-ish venues....
Illinois freshman big man Brian Carlwell's condition has been upgraded from critical to serious after suffering a severe concussion in a one-car accident late Monday night. Carlwell was riding in a car driven by teammate Jamar Smith, who was treated and released from the hospital. From oracular Illini observer Mark Tupper:

Smith was driving the car in which Carlwell was a passenger when the north-bound car crossed the center line near the 2000 block of South First Street in Champaign and struck a tree. The wreck occurred between 11:30 and 11:45 p.m., Monday during snowy conditions.

Smith was charged with improper lane usage and a university spokesman said an investigation into the incident was ongoing and additional charges were possible.

WCIA television in Champaign interviewed a witness who said police were called after Smith’s badly damaged car was seen at his apartment complex in Savoy shortly after the time of the accident. The witness said police and rescue personnel arrived at the apartment complex and found Carlwell still inside the vehicle.

It took rescue personnel about 15 minutes to extricate Carlwell from the vehicle before he could be transported to the hospital, the witness said.

Michigan State beat Michigan 59-44 last night in East Lansing. This was a two-point game with less than seven minutes to play but the Spartans closed the evening with a 21-8 run. Blame the 44 points partly on a slow pace (59 possessions) but mostly on poor shooting by the Wolverines on those few (39) occasions when they didn't turn the ball over. Drew Neitzel led all scorers with 21 points on 15 shots, while Raymar Morgan added 18 points. For Michigan, Jerret Smith had seven points, two assists, and five turnovers in 22 minutes. (Box score.)

Indiana's game against Purdue in West Lafayette has been postponed until tomorrow night due to the weather.

Ohio State plays Penn State in State College tonight (ESPN, 7 ET), which makes three "State"s in this sentence. (No, four!) More in sorrow than in anger, a look at the Nittany Lion defense from savvy PSU observer Jeff Rice.

Wisconsin plays Minnesota tonight in Minneapolis. Minneapolis Star-Tribune columnist Jim Souhan says this border battle is no contest. Souhan's colleague at the Strib, Jeff Shelman, salutes Bo Ryan: "At a time when early NBA departures and growing parity make consistent winning difficult, Ryan has found steady success." A look at the Badgers' recruiting on the west side of the Mississippi and St. Croix here.

Northwestern's game against Iowa in Iowa City has been postponed until tomorrow night due to the weather.